Considered a Rubik’s cube by many, the so-called “case of Mykonos” appears to remain a puzzle, if you try to judge it or explain it by the naïve notion of a, more or less, miraculous “sun and beach” brand.

After all, Mykonos is not a complicated place: it is a small and simple one, which does not mean that it will not provoke thought, the cell that wants to dance or the optic nerve that wants to be stimulated.

This island is beautiful one way or another with the sound of millions of waves breaking on the shore in all directions with the help of the god Aeolus. No matter what, fact is that a more magic mixture of colors than this one doesn’t exist anywhere else: the white and blue architectural style blended with the lilac hue of the sunset, the ochre of earth contrasting with the 50-plus aquamarine seashores, all together enveloped in a unique joie de vivre.

This is Mykonos: everything lies beyond a horizon of infinite possibilities, baked under Apollo’s sun. It is one of the very few Greek places which, like an ideal tumbler, has exercised in balancing the drama of the place with human demands and artificial progress.

On one hand, this island is a merrymaker, a dancer, a singer and a boozer. A film star. This allegory suits Mykonos. It will enjoy the limelight as well as be amused with flattery and attention, endowed with an abundant charisma and perfect looks. The lens adores it. It has such a brilliant radiance that wins one over at first sight. Mykonos is a Modern Greek goddess posing before the camera. Truth be told, the island has the quality of a diva to the extent that, as it happens with every first-class Angelina Jolie, you are left with no other option than fall in love with her.

Of course, development does exist. The leap from Hesiodus to the “turbo” modernization was not small. In addition, it was unavoidable: if fame is the knife carving up the history of all humanity into fifteen-minute pieces, Mykonos will take the lion’s share. However, fame is also the price one pays in order to be a part of the future, and Mykonos is an XXL celebrity. Therefore, in the aftermath of poets’ elegies and of the prophetic song of Melpo Axioti’s own “black dove”, it is high time one learns the history of Mykonos not from Camus and Caragatsis but from the modern media, though it is a fortunate event that local literati are still around to teach us about the beauty, pain, joy and proud brevity of this rock. 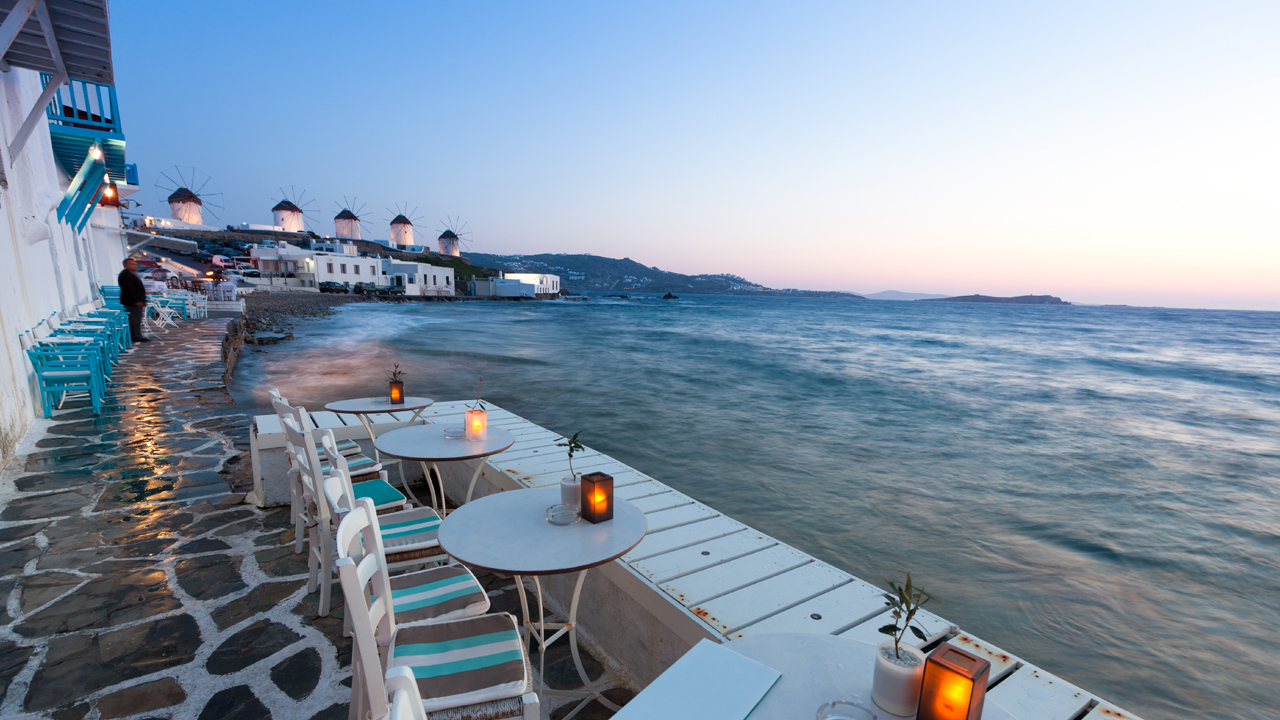 For Mykonos is nothing more than 105 km2 of a seedless, barren rock which is so fragile and needs human protection that it can be fit to isolate you. And this Mykonos also exists today: the identical copy of Pirandello’s Sicily and of the Taviani brothers’ Chaos. The Mykonos of the great Greek architect Aris Constantinides, encountered in homes with photographs of mustachioed ancestors hanging on the walls and inhabited by women who cooked by burning dung and lacking water; the Mykonos of smells and sounds coming from Egypt, Smyrna, Syros, the Black Sea and Piraeus.

The island of the Le Corbusier’s cherished and revered Paraportiani and 600 other churches, the island with the most dazzling natural light in the world and the sacred grounds of Delos nearby. This Mykonos will still exist. Even when the limelight is dimmed, a Mykonos suffused with light and full of whitewashed walls will always come to the scene.

As we move toward the end of this millennium’s second decade, Mykonos is afloat exactly here; a symbol and monument of human vanity, but also a wondrous collection of the Aegean’s metaphysics; a place of hedonism that comes obligation-free, like Fitzgerald’s Riviera, suffocating in the arrogance of its colonialists but evermore breathing through its local heroes and proud Greeks, who speak a singing dialect and carry memories from Crete, Venice and the Turkish Occupation, revering death, remembering customs and calling one another by their nicknames.

Quite a fortunate event that worthy natives are at the helm to steer the island’s galley and keep things in balance; a generation of locals who, growing up with another view of what exactly the feast of life was like, being, at the same time, apt to new things, without the complex of “Europe’s waiters”, as well as daring enough to attempt risky leaps, adding true depth and character to their community, have helped the place take off, continuously proving why Mykonos is a representative showcase on a global level, a cultural engine of great horsepower. Without mentioning them, this Rubik’s cube would be unbearably unsolvable.